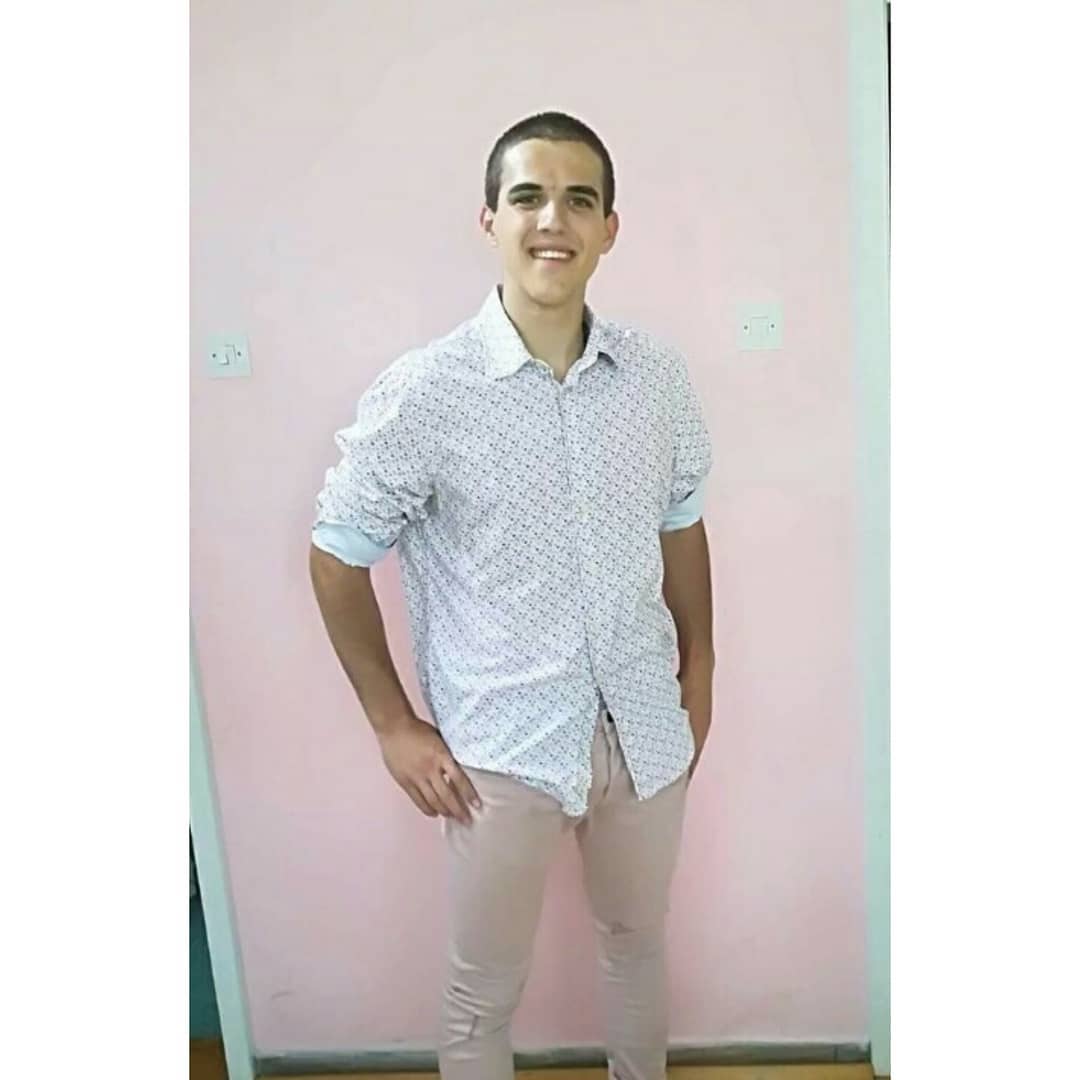 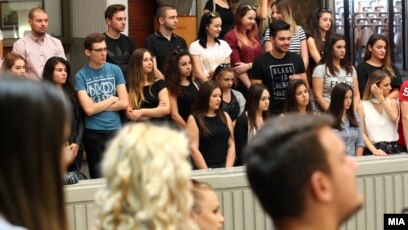 The majority of students would not report corruption to the authorities if they found out that it was happening. This alarming fact resonated in the media in North Macedonia after the NGO Youth Education Forum (YEF) published the results of two surveys for students’ perception of the corruption in dormitories, conducted last year. Experts believe that students, and young people in general, find it more difficult to distinguish between corrupt and non-corrupt practices and that education should be the starting point for the fight against corruption.

Students are passive in the fight against the corruption

According to the first YEF survey, 89% of respondents do not know where they could report corruption, and 53% of students answered that they would not report corruption to the authorities, such as using connections or personal acquaintances to get a bed in the dormitory, and influence, pressure or threats from members of the Tenants' Council and the political parties on the students to gain some benefit.

Although 60% of respondents said that they didn’t notice corruption in the dorms where they were staying, when asked about specific manifestations of corruption and dishonesty, more than a third of respondents had personal experience with one of those phenomena or knew someone to whom it happened. This data shows that students have a narrower understanding of the term "corruption" which does not include certain actions, although, according to North Macedonian legislation, they are punishable, the study said.

There are no differences on this topic between student-residents of the other three dormitories surveyed in the other study.

"Non-reporting of corruption can be explained by the attitude of the respondents that are not interested in reporting corruption and don’t believe that if they report corruption something will change", Petar Barlakovski, a YEF researcher, pointed out during the presentation of the results.

There are many forms of corruption in higher education

Eva Cvetkovska, President of the University Student Assembly at the state university "Cyril and Methodius" in Skopje, believes that there are other forms of corruption in higher education as well that students do not recognize, such as mandatory buying of original books as a condition for passing the exam, getting a signature or higher grade, nepotism in terms of passing exams and grading, faculty funding model and ineffective staff evaluation. According to her, the broadest definition of corruption in higher education is the abuse of authority for material gain and includes the abuse of public position or trust for personal and private purposes.

"On the one hand, the students are in the race for easier and faster obtaining a degree, in order to position themselves faster on the labor market, and on the other hand is the demotivation of the academic staff and professors who think they are underpaid for their work. Furthermore, the influence of the political parties in every segment of our society creates fertile ground and wonderful conditions for corruption. Thus, we teach the young people who want to receive their diplomas for a short time, that there is no need to dedicate enough time to the quality of their skills and knowledge, and that things can and usually go through shortcuts", wrote Cvetkovska in a column for the Advisory Youth Rights Service at the YEF.

She proposes each faculty establishes a separate body for reporting and dealing with corrupt practices that will be specialized in registering and dealing with corruption and with integrity and performance in its work, which will instill confidence in students to report. Cvetkovska also encourages students to inquire about the person authorized for reporting corruption at their university, and not be afraid to report.

The Declaration for "Universities without Corruption" has existed for five years, and the Ministry of Education does not recognize it 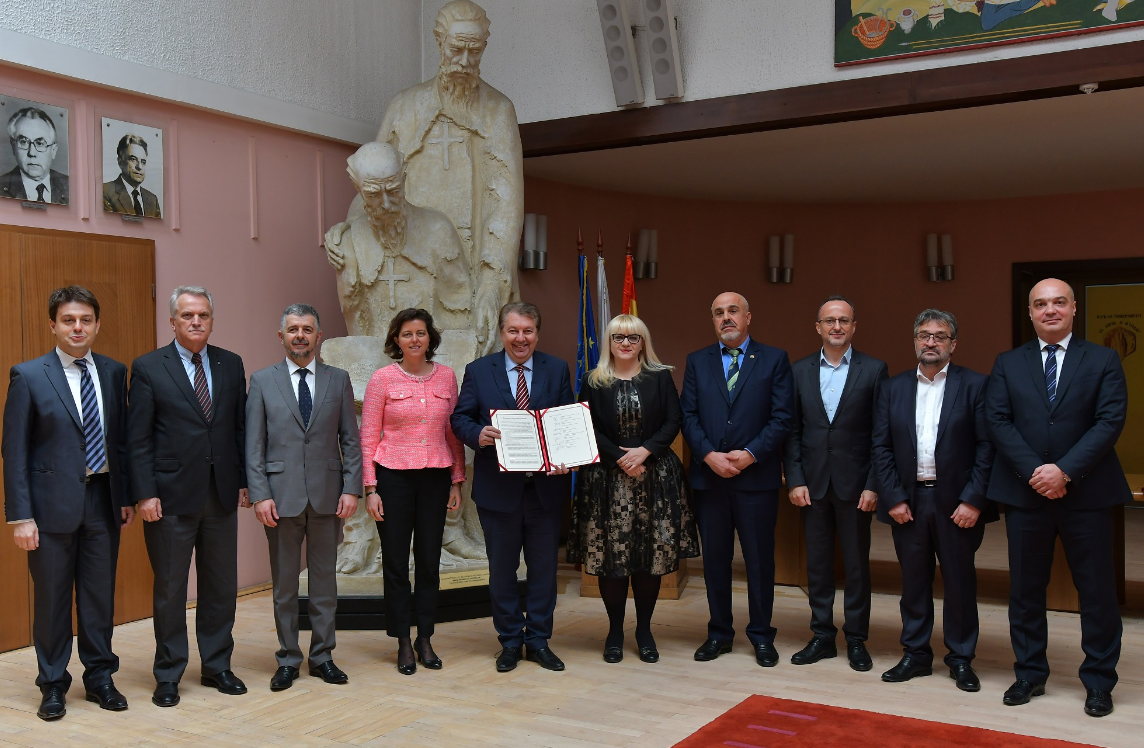 Photo: Signing of the Declaration for a "University without Corruption". Source: akademik.mk

The rectors of the seven public universities in North Macedonia signed the Declaration for "University without Corruption" in 2017. According to the Declaration, inter-faculty and inter-university cooperation should be promoted for the inclusion of content in the curricula that will encourage ethical behavior and explain the mechanisms for the fight against corruption. The declaration, among other factors, envisions "the implementation of international best practices and standards for the prevention of corruption in higher education in the codes of ethics and internal acts of universities".

However, the North Macedonian Ministry of Education and Science (MES), in its Action Plan for Prevention of Corruption 2021-2022, assessed that awareness of addressing the issue of corruption is low in the educational institutions, and that this problem is not imposed by the governing bodies of the universities too.

"Conferences and debates on this topic are occasionally organized, but there are no official documents and activities. In order to improve the situation in this area, campaigns and systematic activities are needed to raise awareness to prevent corruption in primary and secondary education, as well as to strengthen the mechanisms through which students and professors can report corruption," the document states. The MES’ Anti-Corruption Action Plan furthermore predicts that the principles of good governance and integrity are the basis for the prevention of corruption and young people should be educated and acquainted with them so that educational anti-corruption content should be created and established in secondary education.

Anti-corruption education to be introduced in schools 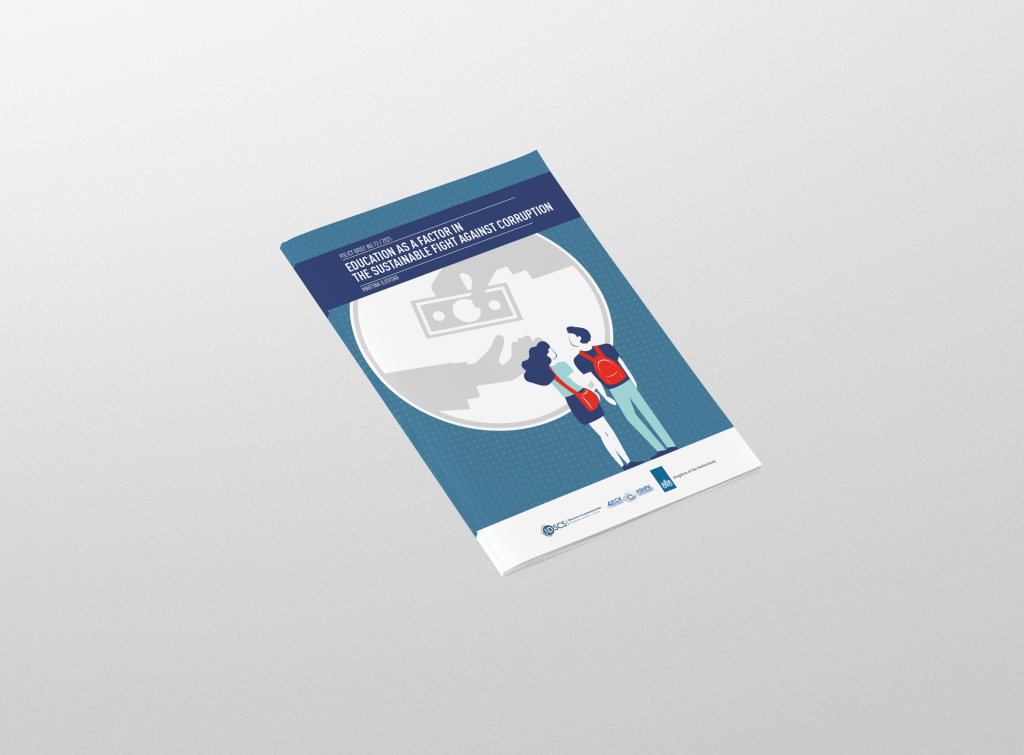 Photo: Policy Paper "Education as a Factor in the Sustainable Fight Against Corruption"; Source: idscs.org.mk

Martina Ilievska, the author of the policy paper "Education as a Factor in a Sustainable Fight Against Corruption", believes that the level of acceptance of corruption by the youth in the country is worrying. The paper states that two-thirds of young people aged 18 to 29 would give money to solve a problem if there is no other way, and emphasizes the need to create an anti-corruption climate in schools.

"Education can play a central role in the prevention of corruption and in building values among young people. Young people today receive most of the information through social media and the mass media and they give a vague idea of complex topics such as corruption. The anti-corruption education integrated into the school activities is an opportunity for young people to acquire structured and objective data. The goal is not just to teach them that bribery is wrong, but to introduce them to much more complex ethical issues regarding the conflict between personal and family interests, on one hand, and the public interest of the community, on the other", wrote Ilievska in the policy paper. 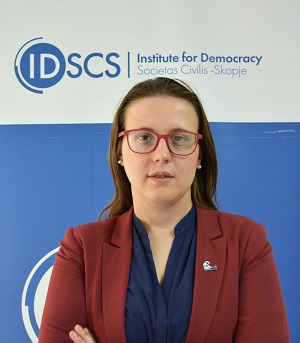 She proposes anti-corruption education in schools to be included in two ways: First, by cross-working on topics across several subjects in the same time period, which will help to have a multifaceted understanding of corruption and build persons that are resistant to corruption. Second, anti-corruption education should be also included in the optional activities and project work, so that students can apply what they will learn and will be encouraged to work together.

The majority of respondents in the research stated that they would not participate and would be bothered if other people participated in corrupt activities, but primarily young people should be able to recognize and report corruption.